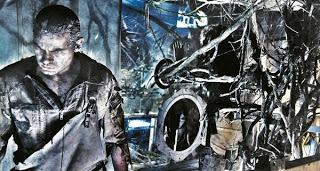 The final day of the film festival was entirely spent by me going to films and today definitely featured an interesting selection.

First up is The Wrestler. I am a big of professional wrestling and I was looking forward to seeing this film.

Before seeing the film I thought this film seemed like “Rocky with Wrestling.” I think that is partially true, but it’s also a drama about a past his prime wrestler having a hard time trying to adapt to a normal life.

Next is Adam Ressurected. This is a story about a Jewish clown (Jeff Goldblum), who is at an asylum haunted by his humiliating experiences at a concentration camp during World War II.

I never really grasped this film. It had a good cast, including Goldblum and Willem Dafoe, but the film kept going back and forth between the past and present and I found that a little distracting.

It wasn’t a bad film, but it wasn’t that memoriable.

Finally we have Eden Log, which is part of the Midnight Madness programme. This was French science fiction film and for the most part it follows a lone protaginist as he explores an underground complex.

I like how the film was mostly silent with very little dialogue and this allows us to discover along with the hero, as he explores the complex and finds out why he’s there.

It was definitely an imersive film and a good way to end this year’s film festival experience.

And that’s the 2008 Toronto Film Festival. I will post my festival wrap-up tomorrow.