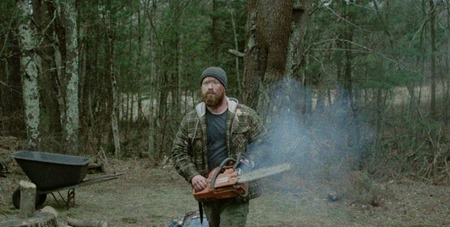 On Friday October 13, 1987, Mark Fisher (Josh Ethier) was one of two men to disappear on during a series of strange events that occurred that night in a town in Maine.  His friend Seth (Graham Skipper) insisted that strange lights in the sky were the cause of Mark’s disappearance.  Two years later, Mark suddenly resurfaces, expect there is now something different about him, particularly the fact that he now violently kills everyone he comes across.  Seth, who somehow had a nightmare about the upcoming events, attempts to save Mark’s ex-girlfriend Jen (Vanessa Leigh) from the now alien hybrid’s oncoming onslaught. I thought that Almost Human was a solid film. The film has a relatively brief 80 minute running time and the plot is paced well enough that it doesn’t outwear its welcome. In fact I can say that I was quite pleasantly surprised when I found myself in the film’s climax and barely an hour had past.  It’s not that often these days that someone gets to watch a film that is so leanly cut.  It is quite obvious that director Joe Begos is a major fan of these types of horror films and Almost Human is  a fine homage to everything from Friday the 13th to the early films of David Cronenberg.  Almost Human’s plot has been described as being Fire in the Sky meets The Terminator. However, I would also argue that Almost Human also has a lot of Invasion in the Body Snatchers in it, especially with Mark’s habit of converting his victims into more alien hybrids, using a very gross looking tentacle (wait for a particularly gross sight gag late in the film).   Despite the science fiction backdrop of the film, Almost Human is very much a homage to slasher films from the 1980s.  The film features many gory deaths, all of which are done in different ways, ranging from axes to shotguns.  Of course, there is particular moment in the film, where Mark is chasing someone with a particularly brutal weapon, only to switch at the very last second.  While this tease was a bit disappointing, thankfully an explanation for the switch is quickly given.  I also have to applaud the film’s sound design, especially with the ear piercing alien screams that Mark makes. Overall, I would say that Almost Human does not disappoint as a homage to the horror films of the 1980s.  While I might have liked a few more science fiction elements added to the mix, I thought that Almost Human was a gory good time and I would recommend checking it out. 8 | LIKED IT