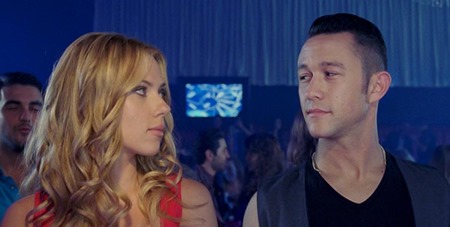 Joseph Gordon-Levitt makes his directorial debut with the edgy romantic comedy Don Jon. Jon (Gordon-Levitt) is a suave New Jersey man, who has somewhat unrealistic expectations for relationships, due to his addiction to pornography.  Jon’s routine involves frequenting nightclubs with his friends, picking up one night stands, and then confessing his transgressions at Sunday church service. Things change when Jon meets Barbara (Scarlett Johansson) and he attempts to change his routines and go into a committed relationship. Since the opening of Don Jon features a shirtless and very ripped Joseph Gordon-Levitt sitting at his laptop for his morning pornography session, it is somewhat obvious that the film is not really aimed at someone of my gender. However, I wouldn’t exactly call the film a “click flick” either, since the film features quite a lot of strong sexual content (including many partially censored clips of the porn videos Jon watches).  Jon is quite a shallow and somewhat misogynistic person, so it’s quite difficult to sympathize his character, who I just considered to be a sleazy jerk.  I also wasn’t a biggest fan of the guido accent Gordon-Levitt used for the role.  Of course, the point of the film is for Jon to realize his shallowness and change the direction of his life.  However, this turn happens too late in the film for me to really care anymore. I also have a feeling that Don Jon was attempting in some ways to be a satire of romantic comedies. This is most evident when Jon takes Barbara on a movie date and they go see a clichéd Hollywood rom-com called Special Someone, which features appearances by Anne Hathaway and Channing Tatum.  However, I think any satire got lost in the film’s overall sleaziness. I have to say that Scarlett Johansson’s character of Barbara, who also had a guido accent, was one of the highlights of the film, even though in some ways she is just as shallow as Jon.  A subplot develops in the second half of the film, in which Jon begins a friendship with a night school classmate named Esther (Julianne Moore), who helps Jon realize how unhealthy his addiction to pornography truly is.  I also have to say that I was a little taken back to see Tony Danza in the film as Jon’s very foul-mouthed father. This definitely clashes with the guy I grew up watching on Who’s the Boss. Overall, while I can say that my enjoyment of Don Jon progressively improved as it went along, it is still a film that didn’t really leave a lasting impression with me.  That said, I’m sure Joseph Gordon-Levitt would make a fine filmmaker.  I just hope that he choses a better subject next time around. 6 | WATCHABLE