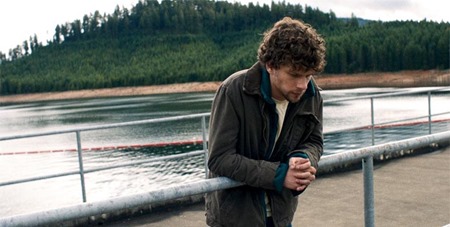 Director Kelly Reichardt (Wendy and Lucy, Meek’s Cutoff) returns with this very naturalistic look at a trio of eco-terrorists. Josh (Jesse Eisenberg) and Dena (Dakota Fanning) are a pair of environmental activists, who join up with Harmon (Peter Sarsgaard) in Portland to blow up a dam.  Despite a few bumps along the way, the plan goes off without a hitch and the three go their separate ways.  However, it quickly becomes evident in the aftermath of the explosion that getting away clean might now be as easy as it seems. Anyone familiar with Kelly Reichardt’s previous films will automatically notice the director’s style of long shots, natural lighting, and minimal music.  There are also few interesting editing decisions in the film, such as cutting a scene mid-sentence and the fact that the plot of the film merely just stops, without any full sense of closure. The title of Night Moves comes from the name written on the back of a boat, which is central to the eco-terrorism plot. The plot of the film is pretty evenly split in two halves.  The first half deals with the eco-terrorism plot itself, while the second half deals with the aftermath.  Throughout the plot to blow up the dam, there are many instances when the trios plans could have gone awry, such as them having trouble buying the ammonium nitrate fertilizer need for the explosives, as well as constant worry about there being possible witnesses.  Without revealing too much, there does turn out to be an unforeseen consequence to this plot, which leads to some harsh choices. I have to say that I was surprised by Dakota Fanning’s performance in the film.  There was a point when I worried whether or not the former child actress would be able to progress into more adult roles.  However, her performance in Night Moves shows that she can handle herself just fine.  I will now look forward to seeing how she develops in the year’s to come.  As for the other performances in the film, Jesse Eisenberg is pretty much playing the same type of guy he always does, expect this time there is a tint of darkness to the role. Same can be said about Peter Sarsgaard, who is only really featured in the plot during the first half. Overall, I can say that Night Moves is an interesting take on the eco-thriller genre and little bit of a different kind of film for Kelly Reichardt.8 | LIKED IT