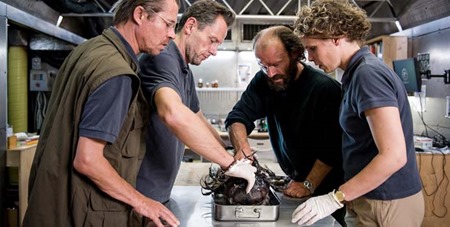 The Austrian sci-fi/horror film The Station focuses on a team of scientists on a Climate Research Base in the German Alps. Lead by Janek (Gerhard Liebmann), the team discovers a blood-like red liquid coming out of a nearby glacier. It turns out that this liquid contains a single-celled organism, which infects local wildlife, developing into vicious hybrid mutants. With the station now in danger from these creatures, Janek rushes to warn his ex-girlfriend Tanja (Edita Malovcic), who is on her way to the base with an important government Minister (Brigitte Kren). With its isolated frozen setting, it’s very easy to think of John Carpenter’s The Thing when discussing The Station. Indeed, I would say that the film heavily evokes that classic, even though I would say that The Station stands out in its own right. Probably one minor quam I have with the film is that the creatures are shown with very quick cuts and you can’t really make them out clearly. Presumably, this was an easy way to hide the “fakeness” of the practical effects, even though I would have really liked to have gotten a better look at these hybrids. That said, the film still has some great gory set pieces.  The breakout character of the film is undoubtedly Minister Bodicek, who is played by director Marvin Kren’s mother. Even though she has the appearance of your average politician, she ends up having many great one-liners and even gets a badass action moment with a giant drill.  She was definitely a fun character to watch on screen. One element of the film that really effected me emotionally was a subplot involving Janek’s dog Tinni. It’s almost a given that dogs don’t have the best chances in these types of films, and indeed Tinni is infected with the organism very early on. It was bad enough that the dog was an obvious goner, but Janek had to tell the story of how he and Tanja acquired Tinni, after nursing her back to health after a bad fall, which killed her previous owner. As a major dog lover, I was in tears as Tinni lay there dying and I would have almost preferred if the film just went the way of The Thing and turn the dog into a monster.  That said, I have to say that the Tinni subplot was done much better than other horror films, which would just kill dogs for a cheap shock. In fact, I would go as far and say that Tinni was a full fledged character in the film. One final point I would like to make is how the actual title of The Station is Blutgletscher, which is literally translated to Blood Glacier. In many ways, this is a much better title for the film, which is better representative of the plot, as opposed to the very generic English title.  Overall, I would say that The Station was a high entertaining film and is so far the highlight of this year’s Midnight Madness selection.  9 | REALLY LIKED IT