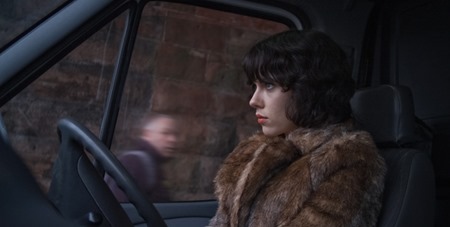 Scarlett Johansson plays a seductive alien temptress in Jonathan Glazer’s Under the Skin, which is loosely adapted from Michel Faber’s 2000 novel of the same name. Laura (Johansson) is an emotionless alien, in the form of attractive female, who drives around Scotland in a white van, looking to lure unsuspecting males back to her home and their demise. Slowly, as she repeats this task, Laura begins to develop empathy for her victims and she begins to feel more like a human. As I tried to process Under the Skin after watching it, I began to feel more inclined to describe it as less of a film and more like a cinematic experiment.  In fact, there are many elements of Under the Skin that feel right at home in avant garde experimental films, such as the opening shot, which features a blue light, images of eclipses, and a giant eyeball.  Also, the film was shot in a highly improvisational manner, with had Johansson in character approaching non-actors and the conversations being recorded with hidden cameras in her van. While, this does lead to some interesting moments, such as when she happens to pick-up a man with a heavily deformed face, it also becomes quite repetitive and it’s a relief when the film goes in a different direction for the third act. The most positive thing I have to say about Under the Skin is that it has some very interesting visuals, which is often accompanied by a haunting score.  There are multiple scenes, which presumably take place aboard the alien’s ship, in which everything, except the characters, are either completely white or completely black.  In some ways this emphasizes the seductive nature of Johansson’s character, in which she progressively wears less and less clothes. It’s hard not to deny that there is a certain artistic quality to these scenes. For me, Under the Skin falters with the fact that it doesn’t seem to have a clear sense of direction. After the repeated seductions have run their course, the film tries to move in a more conventional direction, with Laura trying to be more human, however it doesn’t really go anywhere.  I will say though that the film has a somewhat satisfying ending to it, even if it’s a bit sudden.  The film also has a couple plotholes in the film, such as a man on a motorcycle, whose purpose is never fully explained, other than the fact that he’s an acquaintance of Laura (and possibly her superior). Overall, while there are definitely many positives to Under the Skin and I recommend giving it a watch, the film didn’t leave a lasting impression with me and I will just consider it to be an interesting experiment. 7 | FAIR