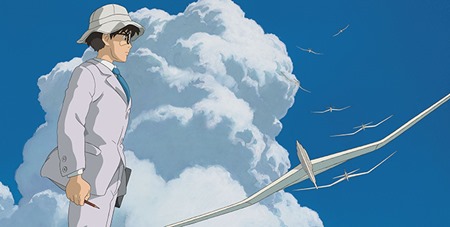 Japanese animation master Hayao Miyazaki returns with a new film that is poised to be the director’s final feature before retirement. For the first time in his career, Miyazaki focuses on a character who existed in real life, in this case being aeronautical engineer Jiro Horikoshi.  The Wind Rises follows Jiro from childhood straight through World World II as he became an engineer for Mitsubishi and eventually designed the famed Zero fighter, which was one of the most beautiful airplanes in history.  Through it all, Jiro also finds love with a girl named Naoko and longs to be with her at all costs.  Jiro’s determination through life is metaphorized through the Paul Valéry quote “the wind is rising, we must attempt to live.” Throughout his career, which has spanned more than 30 years, Hayao Miyazaki has made a name for himself by directing fantastical features, such as Castle in the Sky, My Neighbor Totoro, Spirited Away, and Howl’s Moving Castle. For The Wind Rises, Miyazaki tones back the fantasy elements for what is essentially a period drama in animated form.  However, the film still features fantasy in the form of Jiro’s many dream sequences, which often has him  talking to this idol, Italian aeronautical engineer Giovanni Caproni.  Caproni often appears when Jiro is feeling down on his luck and often asks the inspirational question “is the wind still rising?” Even though the film takes place over multiple decades, the passage of time happens relatively quickly.  Even though the film starts off with Jiro a boy, he quite quickly is shown as a young man heading to University.  Even more quickly is the progression to the start of his career at Mitsubishi, after which point the fast time passage doesn’t matter as much.  With Japan being a country of poor economy at the time, Jiro struggles to design an aircraft that can be considered a match for the planes being designed in the Western world. The film doesn’t really go too much into the World War II backdrop. Even though Japan was technically aligned with the Nazis during the war, Jiro is depicted as someone who cares more about making beautiful aircraft, with little care about what they will actually be used for.  That said, the film makes it no secret that Jiro’s crowning achievement, the Zero fighter, is very likely the same planes used by kamikaze fighters during the war (there’s even a comment about having to remove the guns to reduce the weight). I should also talk a bit about Jiro’s romantic subplot with Naoko.  It’s a bit of a tragic love story, since Naoko is revealed to be suffering from tuberculosis and is often in a weakened state. However, despite Naoko’s illness both are determined to be together and the plotline as a whole nicely parallels Jiro’s desire to build the best planes. In the end, The Wind Rises turns out to be a very emotional and mature swan song for Hayao Miyazaki.  This film just goes on to show that animated films don’t always have to be specifically aimed at children and I would say that The Wind Rises is just as excellent as any live action drama.  I believe one of the final quotes in The Wind Rises sums up the film just perfectly and that simply just “you must live.”10 | LOVED IT