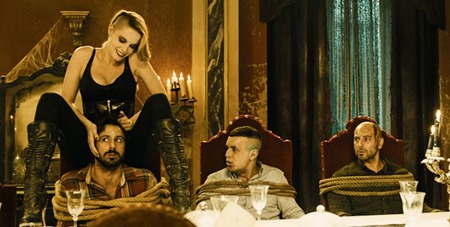 The 25th anniversary of Midnight Madness concluded with a bang with the crazy horror/comedy Witching & Bitching by Spanish director Álex de la Iglesia (The Last Circus). Jose (Hugo Silva) is a down-on-his-luck divorced man, who is forced to bring his son Sergio with him on a robbery of a cash-for-gold store.  During the getaway, Jose and his accomplices find themselves in the town of Zugarramurdi, which is infamous for its association with witchcraft.  They are quickly captured by a coven of witches, whose leader Graciana (Carmen Maura) believes Sergio is the chosen one they are looking for, in order to perform an ancient ritual that will destroy all mankind (emphasis on the man). Witching & Bitching is one of those fun crowd-pleasing films that shouldn’t be taken so seriously. The tone for the film is set in the opening sequence, which has Jose dressed up as a silver Jesus, during his robbery of the jewellery store.  Other various street mascots join in as accomplishes and one of the most hilarious images in this sequence is someone dressed up a Spongebob Squarepants brandishing a machine gun. The action just gets crazier from there when the witches show up.  The film isn’t particularly gory (save for one scene involving metal teeth), however there is a very entertaining chase scene, which has witches running on the walls and roof.  Then of course, there’s a monstrous image in the climax that will just burn into your mind. It quickly becomes apparent that Witching & Bitching is a bit of an allegory for the relationship with men and women.  Nearly every male character in the film is shown at one point complaining about their significant other and the coven of witches are revealed to be quite the feminists.  This leads to a subplot, in which a punkish witch named Eva (Carolina Bang) begins to feel attracted to Jose, which leads her to having to choose which side she’s on. I have to say that I had quite a fun time watching Witching & Bitching.  Along with Game of Werewolves, which played at Toronto After Dark last year, this film shows that the Spanish have a certain knack for entertaining horror/comedies.  If there is one small nitpick I have about the film, it is about the use of not-so-great CGI in some scenes (including some obviously fake CGI blood).  That said, I can still say that Witching & Bitching was definitely a fun way for me to finish this year’s Midnight Madness line-up.8 | LIKED IT