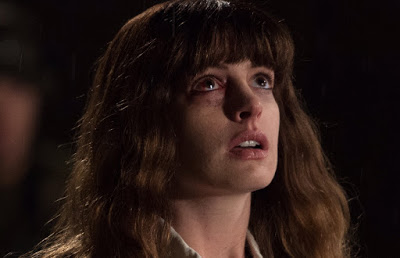 An alcoholic woman discovers a connection between her downward spiral and a series of monster attacks in Colossal. Fed up with her hard partying lifestyle, Gloria (Anne Hathaway) is kicked out by her boyfriend Tim (Dan Stevens) and she moves back to her hometown. Gloria is reunited with her old friend Oscar (Jason Sudeikis), who offers her a job a his bar, where she continues her hard-drinking ways. Reports begin to surface of daily monster attacks in Seoul, South Korea, which Gloria quickly learns might have a source close to home.

From Spanish director Nacho Vigalondo (Timecrimes, Open Windows) comes this new dark comedy, which parallels monster attacks with the horrors of alcoholism. I’m going to refrain from saying exactly what the connection is, since discovering it is half the fun of watching Colossal. The film is a different type of role for Anne Hathaway, who spends much of the film as a disheveled, alcoholic loser.

Colossal is a very fun twist on the kaijyu monster film, which asks the question what exactly is the real monster in all of this chaos. There are definitely some metaphors about alcoholism at play throughout the film, with the mostly humorous film getting quite dark in the latter half. However, overall Colossal is a quite fun to watch film, especially if it is seen knowing as little as possible about it.