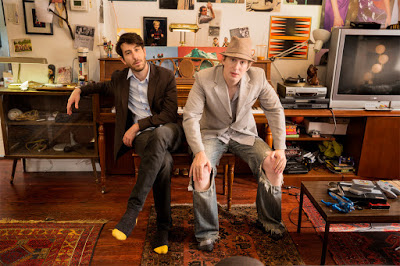 Viceland presents the television series nirvanna the band the show, based on the original webseries of the same name by Matt Johnson and Jay McCarrol. Matt and Jay are two members of a band, whose ultimate goal is to get a gig at the Rivoli club in Toronto. The two come up with a number of elaborate hijinks to achieve this goal, whether it be creating a float for the Santa Claus Parade, making a ruckus at a screening of Star Wars: The Force Awakens, or sneaking a film entitled Operation Avalanche into the Sundance Film Festival.

Quickly gaining a following from his faux documentary feature films The Dirties and Operation Avalanche, Matt Johnson returns to his beginnings as he remakes the 2007-2009 webseries he made with Jay McCarrol. The TIFF presentation of nirvanna the band the show showcases three episodes of the series, which demonstrates the duo’s ability of combining guerrilla filmmaking techniques with a fictionalized narrative. There is also a heavy pop culture element of nirvanna the band the show, with the credits of each episode being a parody of a well known sequence, whether it be Home Alone, Daredevil, or Entourage. Also, keep an eye out for a few notable cameos.

While a sampling of a larger series, the three episodes showcased here work well as an inter-connected narrative. While there are some questionable ethics at play in the way the series is filmed (i.e. shooting in the theatre while Star Wars is playing), the hijinks of Matt and Jay are often quite hilarious to watch. I look forward to checking out the full series and I might even go back and catch up with the original webseries as well.