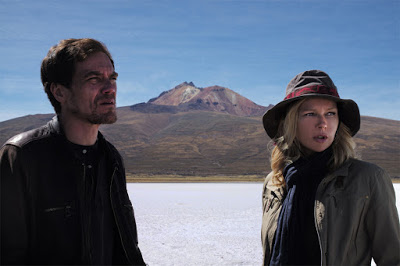 A delegation of scientists are kidnapped by a rogue businessman in Salt and Fire. A team of United Nation scientists, lead by Laura Somerfeld (Veronica Ferres) and Fabio Cavani (Gael García Bernal), travel to South America to investigate the severity of the Diablo Blanco salt flats. However, the delegation is kidnapped by men working for Matt Riley (Michael Shannon), the CEO of the consortium that’s responsible for the salt flats. It turns out Riley has his own plans when it comes to preventing possible global devastation from both the salt flats and a nearby volcano.

Werner Herzog directs this eco-thriller about two individuals, who have different ideologies when it comes to preventing future ecological disasters. Salt and Fire has two pretty distinct halves, with the first part of the film taking place on Matt Riley’s compound, before the action moves to the very salt flats that Laura has come to investigate. All the while, Laura records logs of her ordeal on her iPad.

In some ways, it seems like Werner Herzog has made Salt and Fire solely to showcase the awe-inspiring visuals of Bolivia’s Uyuni salt flats, where the film was shot. Indeed, there is some impressive cinematography in the second half of the film. However, the story isn’t quite strong enough to support these visuals, with the only real solid performances coming from the two leads of German actress Veronica Ferres and Michael Shannon, with there also being a quite quirky supporting role by real-life scientist Lawrence Krauss. Altogether, Salt and Fire is worth it for the visuals, if you can make it past the somewhat weak story.