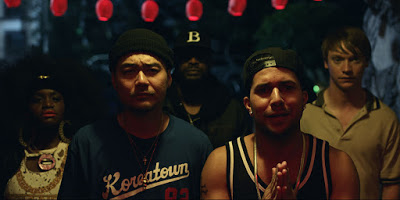 A nerdy white college kid becomes a sensation in the world of battle rapping in Bodied. As research for a thesis paper, Adam (Calum Worthy) attends a rap battle hosted by the Killerfornia Battle League, accompanied by his less-than-impressed girlfriend Maya (Rory Uphold). Afterwards in the parking lot, Adam finds himself placed in an impromptu rap battle, where he does surprising well. This results in Adam being invited to participate in rap battles, under the tutelage of skilled rapper Behn Grym (Jackie Long). However, despite doing extremely well, Adam soon realizes that the vulgar disses of the battles comes with some very real consequences.

From director Joseph Kahn (Detention) comes this satire about the world of battle rapping. Despite criticisms by his vegan/feminist girlfriend Maya about “shamelessly appropriating African American culture,” Adam decides to participate in battle raps, quickly becoming a rising star. However, as Adam pushes the bar with heavily racist and personal lyrics, he soon finds himself victim of the consequences of using such language.

Bodied is a film that pushes some major buttons and it is probably going to be a film that will insult some people. At first, it is kind of humorous seeing a nerdy white kid participate in hardcore battle raps, however soon the question raises about whether Adam truly means the very despicable things that he raps. With a cast that includes some real battle rappers, such as Dizaster and Dumbfoundead, Bodied is a film that is sure to find an audience among the hip-hop community.