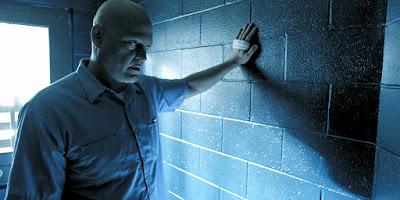 An imprisoned drug runner unleashes his violent side to save his wife in Brawl in Cell Block 99. Bradley Thomas (Vince Vaughn) is a violence-prone man, who does drug running for his friend Gil (Marc Blucas) to support his pregnant wife Lauren (Jennifer Carpenter). When a pick-up for a man named Eleazar (Dion Mucciacito) goes sour, Bradley finds himself imprisoned. He is quickly visited my a Placid Man (Udo Kier) working for Eleazar, who has taken Lauren hostage and demands that Bradley find a way to get transferred to the maximum security Red Leaf Prison, run by Warden Tuggs (Don Johnson), and kill a prisoner in cell block 99.

Director S. Craig Zahler follows up his debut feature Bone Tomahawk with the brutal crime drama Brawl in Cell Block 99. The film introduces the film’s protagonist Bradley Thomas as a man who is fired as a tow truck driver, discovers his wife was seeing someone else, and then proceeds to destroy a car with his bare hands. This establishes the tone for this film, which sets the stage for the first hour, before exploding into some of the most brutal violence seen on screen, which would likely make even the most desensitized viewer squirm.

Brawl in Cell Block 99 is definitely a different type of role for Vince Vaughn, though he does a good job of switching between Bradley’s caring and violent sides. The ultra-violent second half of the film almost plays out like a video game, with Bradley being sent to a new prison or cell block every time he picks a fight with the guards or fellow prisoners, all leading towards the titular brawl in the very medieval looking cell block 99. If you can handle the violence, Brawl in Cell Block 99 is one hell of a ride.