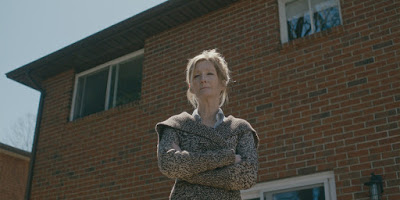 A woman tries to move on with her life after serving time in prison in Cardinals. Valerie Walker (Sheila McCarthy) is released from prison after serving time for killing her neighbour in an apparent drunk driving accident. Valerie is picked up by her daughters Eleanor (Katie Boland) and Zoe (Grace Glowicki) and she plans on quietly moving on with her life, under the supervision of her parole officer Jonah (Peter Spence). However, Valerie is visited by the victim’s son Mark (Noah Reid), who believes that his father’s death might have been less than accidental.

Cardinals is the first feature film from directors Grayson Moore and Aidan Shipley and it stars legendary Canadian actress Sheila McCarthy as a woman trying to move on with her life after serving time for vehicular manslaughter. However, after an awkward confrontation with Mark, it soon becomes apparent that the past isn’t easily buried.

The plot of Cardinals plays out very much like a play, with the film only focusing on a very small cast of characters. More details about Valerie’s crime are revealed as the film progresses, with the film building towards a tense confrontation with Mark, who is desperate to know the truth. While Cardinals features some very solid performance from the cast, particularly Sheila McCarthy, the story chooses to end at a point where there is no real sense of closure, which brought my opinion of the film down a notch.