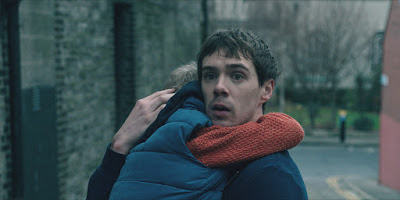 Those previously infected by an infectious virus are viewed as outcasts to society in The Cured. Ireland is in the process of recovering from the outbreak of the Maze Virus, which effectively turned the infected into violent zombies. A cure for the virus was found, with 75% of the infected returning to their pre-infected state, though they retain all memories of the horrible things they did. Senan (Sam Keeley) is one of The Cured, who goes to stay with his American sister-in-law Abbie (Ellen Page) and her young son. However, prejudice against The Cured grows and Senan’s friend Conor (Tom Vaughan-Lawlor) prepares to fight back.

The Cured is a different type of zombie film, which focuses on a world after zombie problem has effectively been taken care of. Senan is one of the many former infected, who are struggling to get their life back. This is not an easy task, since they still viewed as monsters and murderers by the general public. This results in some of The Cured, particularly former lawyer and politician Conor, to believe that they are likely safer with the 25% resistant to the cure, than a society that wants them all dead.

Like many zombie films, The Cured is a film that can be viewed as a social allegory about fear of “the other.” The fear of The Cured have parallels to racism, but the film’s Irish setting evokes comparisons to The Troubles, despite the fact that the film takes place in Dublin and not Belfast. This especially true when a group of The Cured lead by Conor begin committing what are essentially terrorist acts against the military that oppresses them. While the film does have blood and scares, The Cured is ultimately much more smarter than the average zombie film.