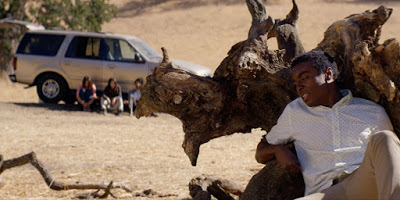 A group of friends are pinned down by a sniper in Downrange. After the tire blows on their car, Jodi (Kelly Connaire), Keren (Stephanie Pearson), Todd (Rod Hernandez-Farella), Eric (Anthony Kirlew), Sara (Alexa Yeames), and Jeff (Jason Tobias) find themselves stranded in the middle of nowhere. It isn’t long before the friends realize that the tire blowing out wasn’t an accident and they are the target of a sniper hiding in the nearby trees. With only the car and some branches as cover, the friends must figure out a way to escape this situation.

From director Ryûhei Kitamura (Versus, Midnight Meat Train) comes a horror film about a group of carpooling college kids pinned down by a crazed sniper. With the groups tire blowing out mere seconds into the film, Downrange doesn’t wait long before the friends are picked off one-by-one in very bloody ways. With limited cover and a sketchy cell signal, the surviving friends have to figure out how they will escape the sniper’s line of sight.

For all intents and purposes, Downrange can be described as a slasher, except with a sniper instead of knife-wielding killer. The carnage becomes increasing unbelievable as the film does on, Ryûhei Kitamura not holding back on some very gory deaths. The film also plays a bit with viewer expectations, involving the tropes of these types of films. Overall, Downrange and entertaining and bloody game of cat and mouse.