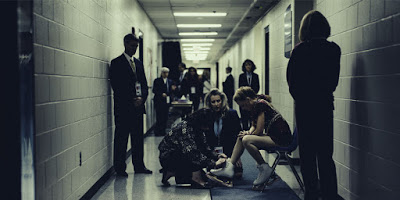 The life and career of scandal-ridden figure skater Tonya Harding is told in I, Tonya. From childhood Tonya Harding (Margot Robbie) was bred to be a figure-skating champion from her stern and often abusive mother LaVona (Allison Janney). Tonya would meet future husband Jeff Gillooly (Sebastian Stan) as a teenager, who initially seemed like an escape from her mother, but turned out to be just as abusive. Praised for her skating, but criticized for her unconventional appearance, Tonya is determined to prove herself leading into the 1994 Olympics. Then the incident happened.

I, Tonya is a tragically comic biopic of Tonya Harding and her life and career leading up to the scandal surrounding the attack on Harding’s rival Nancy Kerrigan (Caitlin Carver). Based on conflicting interviews with Harding and Jeff Gillooly, I, Tonya takes on a mockumentary format, as the central characters give their version of the events. This results in a very tongue-in-cheek tone to the story, with the added tragic element of a promising career ruined by scandal.

Aside from the OJ Simpson murder case, the scandal involving Tonya Harding was probably one of the biggest news stories of 1994, to the point that I still vividly remember it, even though I was 12 at the time. All but ignoring Nancy Kerrigan, I, Tonya is all about Tonya Harding’s side of the story and the film really casts her in a sympathetic light, placing most of the blame for the incident on Jeff Gillooly and his friend Shawn Eckhardt (Paul Walter Hauser). With her career ruined and turned into a punchline by the media, it’s easy to forget Tonya Harding’s accomplishments, such as being the first American skater to land a triple axle jump. Altogether, I, Tonya is a surprisingly excellent biopic, with a very sympathetic portrayal of Tonya Harding.