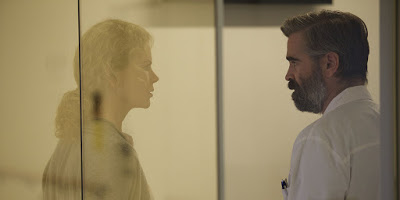 A heart surgeon must make a horrible choice in The Killing of a Sacred Deer. Steven Murphy (Colin Farrell) is a cardiac surgeon living a seemingly happy life with his wife Anna (Nicole Kidman) and two children. Steven develops a paternal relationship with Martin (Barry Keoghan), a 16 year old boy, whose father died on Steven’s operating table years prior. However, the seemingly harmless friendship soon takes a strange turn and Steven if forced to make a choice that will forever effect his family.

From director Yorgos Lanthimos (The Lobster) comes a psychological thriller than goes to some very strange places. Steven Murphy begins a friendship with Martin out of sympathy, since the boy lives alone with his mother (Alicia Silverstone) and Steven likely harbors some lingering guilt about being responsible for Martin’s father’s death. However, Martin’s behaviour becomes increasingly obsessive, to the point that he even begins to date Steven’s daughter Kim (Raffey Cassidy). Then things take a more unusual and sinister turn.

It is hard for me to talk too much about The Killing of a Sacred Deer without heavily spoiling the plot, though I will say that the film has some vaguely supernatural plot developments, which results in the film progressing from drama to almost a horror film. Probably the shining performance in the film is teenage actor Barry Keoghan (Dunkirk), who simultaneously is able to come of as sympathetic and creepy, with his somewhat autistic behaviour. While The Killing of a Sacred Deer might leave you a bit shaken and dumbstruck, it is still a film worth checking out.