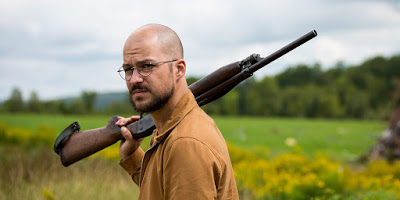 A group tries to survive a zombie outbreak in a remote Quebec village in Les Affamés. A flesh-eating plague has broken out in Quebec and a small batch of survivors try to make to safety. These include Bonin (Marc-André Grondin), who is always cracking joke, Tania (Monia Chokri), who has a “dog bite” on her hand and is always carrying an accordion, and Zoé (Charlotte St-Martin), an orphaned girl rescued from her home. The three meet up with other survivors and try to come up with a plan to make it to safety.

In Les Affamés, director Robin Aubert places a zombie outbreak in a remote Quebecois village. Marc-André Grondin (C.R.A.Z.Y., Goon) plays Bonin, the defacto leader of a group of survivors trying to find a safe haven. The survivors soon come to realize that the infected flesh-eaters aren’t exactly that mindless and have in fact started gathering in fields around piles of junk. This all sets the stage for a bloody fight for survival.

While there is indeed plenty of blood and gore in the film, Les Affamés can be described as a bit of serious zombie film. That said, there is also some dark humour in the film, including a recurring gag that gets one hell of a payoff. The film doesn’t really bother with too much exposition or backstory, but you still get to know and care for the characters as the film goes on. In many ways, Les Affamés is like a Quebecois version of The Walking Dead. Take from that description as you may.