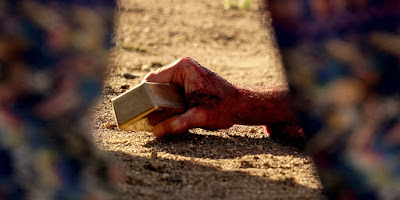 Let the Corpses Tan is the latest film from the French filmmaker duo Bruno Forzani and Hélène Cattet (The Strange Colour of Your Body’s Tears). In a similar way the duo’s previous film was a homage to Italian giallos, Let the Corpses Tan is heavily evocative of spaghetti westerns, with added elements of poliziotteschi crime films. Shot on Super 16mm, this film looks like it could have been made sometime in the 1960s. However, Forzani and Cattet at their touch to the film, such as very jarring edits and a very loud soundtrack.

Just like The Strange Colour of Your Body’s Tears, Bruno Forzani and Hélène Cattet’s Let the Corpses Tan is an invasion of the senses, with the film having a whole lot of style over substance. In fact, it’s sometimes hard to discern what the plot of the film actually is, since there are so many quick cuts, bright colours, and extreme violence. In some ways, the film is more arty and western version of Ben Wheatley’s Free Fire. I can’t say I fully understood the film, but Let the Corpses Tan is unique to say the least.