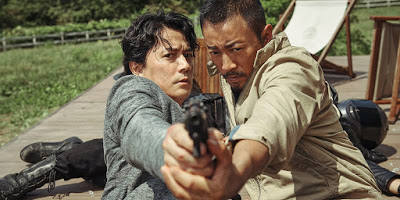 John Woo makes his return to action filmmaker with Manhunt. Du Qiu (Zhang Hanyu) is a Chinese lawyer working of the Tenjin Pharmaceutical company in Osaka, Japan. The morning after a party commemorating his departure from the company, Du Qiu wakes up with the body of a dead woman beside him. Framed for the crime, Du Qiu goes on the run and he is pursued by veteran detective Yamura (Masaharu Fukuyama). However, it soon becomes apparent that the frame-job is part of a larger conspiracy surrounding Tenjin Pharmaceuticals.

Following a number of period dramas, John Woo returns with his first pure action film in 14 years with Manhunt. The film is a remake of the 1978 Japanese film of the same name, which was a major influence on Woo’s films. John Woo’s version of Manhunt retains the Japanese setting, with a mix of Chinese and Japanese characters. In addition to the two central protagonists, Manhunt stars Qi Wei as female protagonist Mayumi and Ha Ji-won and Angeles Woo (John’s daughter) as female assassins Rain and Dawn.

For his return to action films, John Woo seems to have his tongue firmly planted in his cheek, as the film is packed full of his signature elements, including dove, with it seeming at times that Woo is winking at the camera. While those expecting a film like The Killer or Hard Boiled might end up feeling a bit disappointed, Manhunt is still an entertaining and welcome return to action films for John Woo.