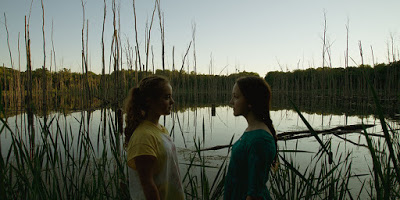 Two teenage girls strike up a summer friendship in Porcupine Lake. Bea (Charlotte Salisbury) is a 13 year old girl, who travels with her mother Ally (Delphine Roussel) to Port Severn, ON, where Bea’s father Scotty (Christopher Bolton) is running the family diner. With her parents embroiled in marital issues, Bea strikes up a friendship with local girl Kate (Lucinda Armstrong Hall), who is much more outgoing than the soft-spoken Bea. Over the course of the summer, the two girls develop a very strong connection with each other.

Porcupine Lake is the sixth feature film by director Ingrid Veninger (Modra, The Animal Project) and developed in part through the pUNK Films Femmes Lab, sponsored by actress Melissa Leo. The film is a summertime coming-of-age story about the growing friendship between two teenage girls in Ontario’s cottage country. It isn’t long until Bea is calling Kate her best friend and there are many suggestions in the film that the connection between the two might be stronger than that. The growing connection between Bea and Kate are contrasted to the failing marriage of Bea’s parents, who are always fighting about what to do with the family diner.

After the very ambitious He Hated Pigeons, a film designed to be seen theatrically with a live score, Ingrid Veninger returns with a coming-of-age film reminiscent of her early films Only and Modra. Veninger cast relative unknowns as the two lead girls and while it does result in some awkward line deliveries, particularly from Charlotte Salisbury, the performances are essentially just teenagers being teenagers. The end result is a lovely coming of age story about teenage friendship.