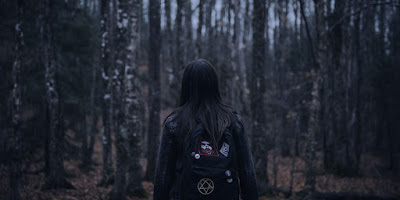 An occult-obsessed teenager awakens a sinister force in Pyewacket. Leah Reyes (Nicole Muñoz) is rebellious teenager, who listens to heavy metal and hangs out with friends fascinated by the occult. Leah has a frustrating relationship with her depressed mother (Laurie Holden), which is made worse when Mrs. Reyes decides to move to a new house up north. After a vicious argument between the two, Leah enters the nearby woods and performs a ritual, calling upon the dark spirit Pyewacket to kill her mother. However, as strange occurrences begin to happen, Leah comes to learn that she has to be careful about what she wishes for.

Adam MacDonald follows-up his 2014 debut feature Backcountry with this tale of supernatural horror. Ever since her father died, Leah has become increasingly obsessed with occult rituals, while her mother falls into depression and alcoholism. Leah hate the idea of moving to an isolated house up north and being away from her friends, who include Janice (Chloe Rose) and Aaron (Eric Osborne). Despite the warnings from her favourite occult author Rowan Dove (James McGowan) to “be careful what you believe in,” Leah calls upon the manipulative spirit Pyewacket, without considering the consequences.

While on its own Pyewacket is a solid supernatural horror film, the film greatly pales in comparison with Adam MacDonald’s very tense debut Backcountry. The plot of the film is heavily cliched, playing up heavily on the “Satanic Panic” fears that assume that rebellious teens who wear black and listen to heavy metal are also obsessed with the occult. That aside, I didn’t really find myself scared by the film, which apes heavily from better supernatural horror films. Altogether, while Pyewacket is still OK, it’s a major sophomore slump for Adam MacDonald.