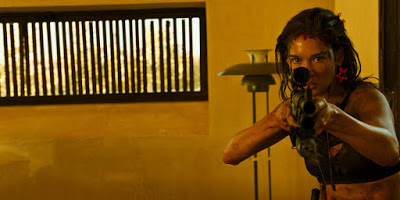 A woman left for dead seek vengeance against those who wronged her in Revenge. Jen (Matilda Lutz) is an American socialite, who travels with her married French millionaire lover Richard (Kevin Jannsens) for a weekend of passion. However, thinks go awry when Richard’s hunting buddies Stan and Dimitri arrive early, with Jen being the recipient of unwanted advances and eventual assault by Stan. To keep her from talking, Richard ends up pushing Jen off the cliff. However, she miraculously survives and with the help of some super-painkilling drugs, she recovers as a vengeance-seeking warrior.

The debut feature film from French filmmaker Coralie Fargeat, Revenge is a film that can probably placed in a similar category to revenge horror film such as I Spit in Your Grave. While not as extreme as that film, Revenge‘s inciting incident is still a very difficult-to-watch, yet relatively ungraphic, sexual assault scene. However, in the film’s second half of the film, Jen is almost literally reborn as a gun-wielding badass, who is ready to take some very bloody revenge against then men who wronged her.

A nice touch Revenge makes is the physical transformation, thanks to a lot of dirt and grime, Jen makes from a lollipop-sucking blonde vixen to a darker haired warrior with a beer can phoenix tattoo on her formerly-impaled chest. While the film does require a level of suspension of disbelief over how Jen was able to survive falling off a cliff onto a  tree, Revenge still ends up being a very entertaining and extremely bloody tale of female empowerment against male oppressors.