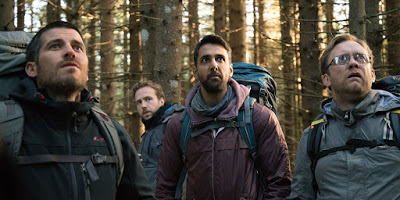 Four friends lost in the woods are chased by a mythical creature in The Ritual. Six months after the tragic murder of their fried Robert (Paul Reid), Luke (Rafe Spall), Hodge (Robert James-Collier), Phil (Arsher Ali), and Dom (Sam Troughton) go on a hiking trip in the Swedish highlands. After Dom injures his knee in a fall, Hodge suggest that the group take a shortcut through nearby woods to cut their trip in half. However, the four soon find themselves lost and, after taking shelter in a mysterious cabin, find themselves being hunted by some sort of creature.

David Bruckner (V/H/S, Southbound) makes his feature debut with The Ritual. The film focuses on four friends, who go on a hiking trip in memory of their friend Robert, who was murdered during a liquor store robbery. Luke, who was with Robert at the time, is plagued with guilt about not doing anything to save his friend. This results in some tension between the friends, as they become lost in the woods, which is only made worse when they realize they are being pursued by something.

I would describe the The Ritual as a film that is trying to be The Blair Witch Project meets The Descent by way of The Wicker Man. However, I have to admit that the film doesn’t quite hit the mark in that regard. I didn’t find The Ritual to be all that scary and the film ends up crisscrossing in many different directions. I would still say that the film is fine for what it is, but it could have been a lot better.