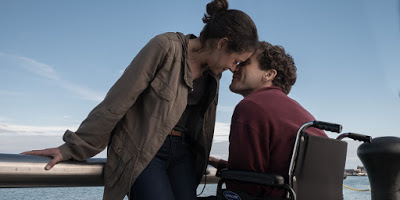 A man struggles to recover following the loss of his legs in Stronger. Jeff Bauman (Jake Gyllenhaal) attends the 2013 Boston Marathon to support his on and off girlfriend Erin Hurley (Tatiana Maslany). However, a terrorist’s bomb goes off right beside Jeff and he ends up getting both of his legs amputated. Since his testimony to the FBI helped with their investigation, Jeff is considered a hero to many, including his mother Patty (Miranda Richardson), who wants to cash in on Jeff’s new found fame. However, Jeff is heavily traumatized from the incident and he works with Erin to try and overcome his ordeal.

From director David Gordon Green comes this true story of a many horribly injured in the 2013 Boston Marathon bombing and how he struggles to cope with both the fame of being a “Boston Strong” survivor, as well as overcoming the survivor’s guilt and PTSD. At the centre of this is Jeff’s girlfriend Erin, who is conflicted about standing by a man that has disappointed her many times before.

Stronger is a pretty well executed drama about a man struggling to rebuilt his life following a horrible and traumatic incident. This film probably has the most challenging performance of Jake Gyllenhaal’s career, since he is playing a man that has lost both his legs, with me quite curious about how they achieved the effect for the film. Best known for TV’s Orphan Black, Canadian actress Tatiana Maslany really gets to show off her dramatic chops in this film, which suggests she has quite a career ahead of her. Overall, Stronger is an inspirational story of survival.