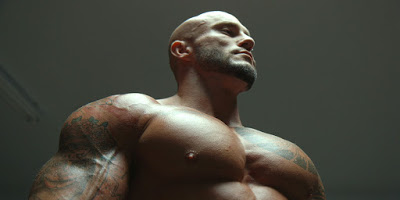 Ta peau si lisse (A Skin So Soft)
From Denis Côté (Joy of Man’s Desiring) comes this observational look at the lives of various bodybuilders. Featuring a mix of both natural and staged scenes, Côté is less concerned about the bodybuilding itself and is more interested in how these men live their daily lives. Ta peau si lisse features many close-ups of the subjects muscular bodies, so the film can be seen as eye candy for those who are into that kind of thing. However, the film also features these big muscular men doing mundane tasks, such as washing the car, getting dressed, or simply sitting and eating. The film did begin to lose me a bit towards the end, when Denis Côté had all the bodybuilders go on a camping trip with each other, but ultimately Ta peau si lisse is an interesting film showing how bodybuilders are just people too, except with extremely big muscles.

Scaffold
In his latest short film, Kazik Radwanski tells the story of two Bosnian-Canadian construction workers, who are in the process of a renovation process. Similar to Radwanski’s 2014 short film Cutaway, the story of Scaffold is told entirely through shots of the construction workers hands and feet. However, unlike the previous short, the two construction workers are frequently talking to each other in Bosnian, periodically switching to English to talk to the owner of  the house they are renovating. Scaffold is a film all about the composition of the shots, which often focus on objects rather than people, particularly the titular scaffold. I am also impressed with how easy it is to follow the story of this short, despite the fact that you never see any of the character’s faces.