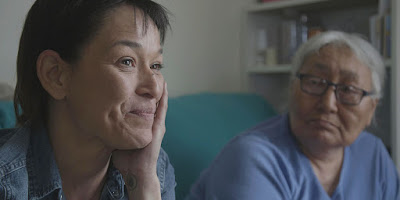 Alan Zweig examines culture and identity in Nunavut in There is a House Here. After five years of communication with Inuk singer Tatanniq “Lucie” Idlout, filmmaker Alan Zweig travels to Nunavut to observe the lifestyle of the Inuit people. There he observes multiple generations of a family living in a single house and a shadow of hopelessness surrounding the people. However, there is more to these people than the assumptions of a white visitor.

There is a scene quite early on in There is a House Here, where Alan Zweig’s question about the supposed third world conditions in Nunavut results in the interviewee deciding not to continue with the interview. Repeated throughout the film, Zweig is asked what he is doing there and what his film is about. Even Alan Zweig himself is not sure about the answer to that question, though he eventually does get some people to open up about issues such as residential schools, alcoholism, and suicide.

While making There is a House Here, Alan Zweig traveled to Nunavut at three different points of the year to observe the Inuit way of life. As a white Jewish man, Zweig is a very visible outsider to this community and many people are reluctant to talk to him. Even his guide Lucie gets uncomfortable or annoyed at some of Zweig’s questions. However, by the film’s conclusion, There is a House Here ends up being a very candid look at both the positive and negative aspects of Inuit life in Nuvavut.