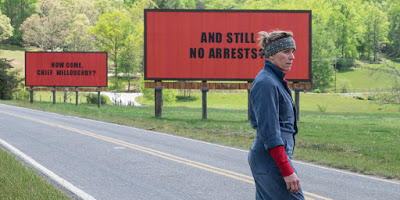 A woman seeks justice for the unsolved murder of her daughter in Three Billboards Outside Ebbing, Missouri. Seven months after the rape and murder of her daughter Angela, Mildred Hayes (Frances McDormand) rents three billboards on an isolated road criticizing the police department’s supposed lack of progress on the case, specifically calling out Chief Bill Willoughby (Woody Harrelson). This results in number of heated confrontations between Mildred and the police, particularly the hotheaded and racist Officer Jason Dixon (Sam Rockwell).

In the latest film from director Martin McDonagh (In Bruges, Seven Psychopaths), Frances McDormand plays a grieving, and very potty mouthed, mother desperate to catch whoever killed her daughter. Separated from her husband Charlie (John Hawkes) and living alone with his surviving son Robbie (Lucas Hedges), Mildred has nothing to lose as she chooses to pick a fight with the seemingly incompetent Ebbing police department. However, this results in Mildred becoming less than popular around the town.

Three Billboards Outside Ebbing, Missouri is a pitch black dramedy, which features one hell of a performance by Frances McDormand. In fact, I would argue that this is McDormand’s best work since Fargo more than two decades ago and I would be surprised if she didn’t attract awards attention. There are also solid performances by Woody Harrelson, who is arguably the most sympathetic character in the film, and Sam Rockwell, whose character turns out to be much more three dimensional than he initially appears. Altogether, Three Billboards Outside Ebbing, Missouri is a perfect mix of drama and biting dark comedy.