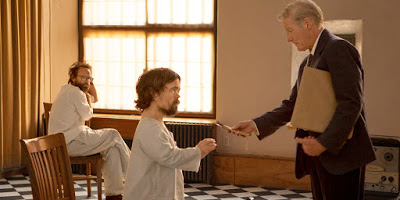 Based on revered social psychologist Milton Rokeach’s 1964 book The Three Christs of Ypsilanti, Jon Avnet (Fried Green Tomatoes) directs this biopic about one of the major turning points in the treatment of mentally ill patients. In the late-1950s/early-1960s time period of Three Christs, the most common treatment for schizophrenia was either electroshock therapy or lobotomies. Not satisfied with institutions that “warehouse, drug, and restrain, instead of treat,” Dr. Alan Stone tries to find a new humane treatment for the Three Christs.

Probably the best word I have to describe Three Christs is “safe.” The film neither blew me away nor was it horrendous to watch. Instead, the film was a relatively straight forward telling of this story, with my only major criticism being that it comes off as major Oscar bait. The film also practically wastes Julianna Margulies as Allan’s possibly alcoholic wife Ruth and there is a subplot about Charlotte Hope’s Becky being attracted to Allan that is never heard from again. Altogether, Three Christs is fine, but you’re probably better off rewatching One Flew Over the Cuckoo’s Nest.