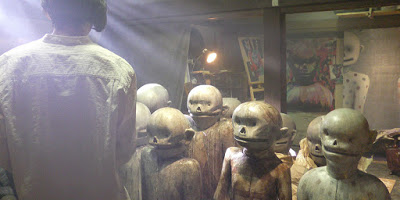 An art school is tormented by sentient killer clay in Vampire Clay. While preparing to open her new art prep school at a former sculpture’s studio, Ms Aina finds a buried box, containing a bag of very old clay. When class begins, latecomer Kaori finds that her clay was taken by newcomer Yuka, so she instead takes the clay that Ms Aina unearthed. However, it soon becomes apparent that the clay has a life of its own and it proceeds to attack and absorb the students of the school.

Best known for his work as a make-up artist, Vampire Clay marks the feature length debut for Japanese filmmaker Soîchi Umezawa (ABC’s of Death 2). The setting of the film is the Aina Academy, where Ms Aina desperately tries to prepare her students for the very competitive art schools in Tokyo. When student Kaori begins using the mysterious clay Ms Aina unearthed, she immediately notices something different about it. It soon becomes apparent that the clay is sentient and has a thirst for blood, as it proceeds to pick off the students one by one.

Vampire Clay is an an absolutely insane film, which can be described as a mix between The Blob, The Thing, and Evil Dead, except with sentient clay. I’m not sure if Vampire Clay is meant to be a horror-comedy, but the scenes of the killer clay attacking the students are often quite hilarious to watch. While the film does slow down in the third act to tell the clay’s backstory, as well as there being an unnecessarily long epilogue, Vampire Clay is still a quite enjoyable watch.