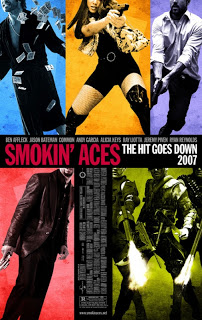 OK, here is my first “review,” though I would call it more an observation.

I never paid much attention to this film until I saw some TV spots for it (and, later, the trailer). I thought the film seemed to have a Guy Ritchie vibe to it.

So, I watched the film today. Even though I would say that it was entertaining, and pretty gosh darn violent, it didn’t really have the same vibe as a Ritchie film, like Snatch. This film is good in it’s own way and there were some pretty funny moments in the film (mostly involving a trio of Neo-Nazi’s and a brief cameo by Jason Bateman).

I should say one thing, whenever you see Ryan Reynolds in these kind of films, it does make you forget the comedies that he is usually known for. I also find it funny that all his serious roles, so far, features him sporting a beard.