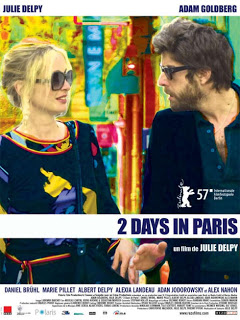 A couple months ago I saw romantic films Before Sunrise and Before Sunset with Ethan Hawke and Julie Delpy. In these films Hawke and Delpy had a seeming perfect connection with each other, with very little conflict.

2 Days in Paris, which was directed by Delpy, seems to be the complete opposite of that. In this film, Delpy and her boyfriend (play by Adam Goldberg) decided to spend a couple days in Paris at the end of a not-so-great trip to Venice.

During these two days, the relationship is put to the test. Most of the conflict is with Goldberg’s character. Not only is there the obvious cultural differences (with Goldberg being American and Delpy being French — she speaks French to pretty much anyone other than him), there is the major awkwardness that comes from running into Delpy’s many ex-boyfriends.

Overall, I enjoyed the film. I always find cultural differences can make for great comedy (the Coen Brothers’ short from Paris Je T’aime is another good example). I would definitely recommend it.