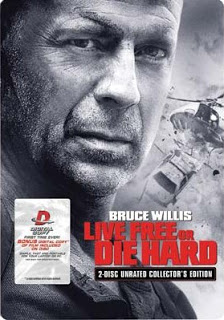 At this time of the year, I usually slow down my DVD purchasing and save most releases to ask for during the holidays. However, I decided to to make one last DVD purchase before that time.

I picked my Live Free or Die Hard DVD at Future Shop, in which it came in a nice steel box. It’s not that big an extra, but it helps with the fact that stores charge extra for 2-disc editions.

The first disc contains both the theatrical and unrated versions of the film. The unrated version is essentially the original R-rated cut of the film, before it was edited down to a PG-13. There weren’t any new scenes that I noticed and the biggest change was that there is now a lot more foul language, as well as slightly more extreme violence (though not as bad as the violence in the original Die Hard films).

The second disc has usual extras including a feature-length making-of documentary, a feature with Bruce Willis and Kevin Smith, a music video, and a “Fox Legacy” documentary on the Die Hard series.

One extra on the DVD that I would like to talk about in particular in the Digital Copy feature. This allows you to copy the film to your computer or a portable video player.

This is an obvious response to movie piracy. However, I don’t think it is worth the trouble. The disclaimer on the packaging says that the file is not compatible with the iPod, PSP, or Zune, which to my knowledge are the top portable video devices. In addition, the file is DRMed and requires internet file verification. In the end, I say this will NOT help the piracy problem.

Overall, this was a very decent DVD release. A comment I should make though is that I wonder why the “unrated” cut wasn’t released as the theatrical version of the film. This cut is more in spirit to the original films than the PG-13 cut. I guess in the end it’s all about money and getting as many people into the theatre as possible.