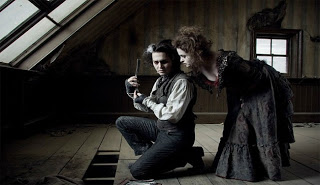 I read an interesting article on IMDB today with a quite by Chicago Sun-Times advertising/marketing columnist Lewis Lazare saying that Paramount is pulling a bait and switch by advertising Tim Burton’s adaptation of Sweeney Todd as a horror film and NOT a musical, which would result in a backlash by disgruntled slasher movie fans.

I believe this complaint has valid points, however Sweeney Todd was already a Tony Award winning musical and there is SOME singing in the trailer. As such, I don’t think there would be THAT much of a backlash.

Still, it is interesting.