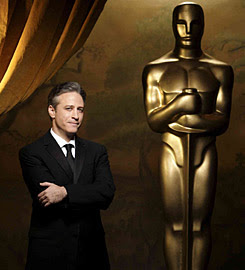 Whether or not you make it through the 4 hour or so Oscar telecast is usually dependent on who’s hosting the show.

The first Oscars that I watched in 1997 was hosted by Billy Crystal and he is without a doubt my favourite of the modern Oscar hosts. My favourite feature I look forward to every year he hosts is the montage, where he edits himself into the nominated films. The problem with him being so well loved is that he seems reluctant these days to keep hosting.

Whoopi Goldberg was a host that frequently alternated in Billy Crystal during the 90s. I would have to say of all the Oscar hosts I watched, she was my least favourite.

I wasn’t crazy about Steve Martin’s first hosting job in 2001, but the second time wasn’t that bad.

Ellen Degeneres could have been better when she hosted last year.

Of course their are also the legendary hosts (most before my time), which either did outstanding jobs (Bob Hope) or terrible jobs (David Letterman).

Well, Jon Stewart hosts the show tomorrow and hopefully it will be a decent show.

And that ends the Oscar Week ’08 specials. Tomorrow afternoon I will post my predictions for this year’s awards and then we will be ready for the 80th Annual Academy Awards!