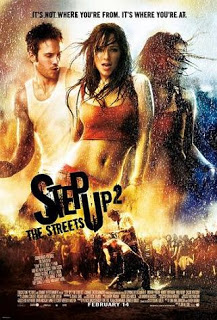 If there is one thing that studying films has done for me, is that it helped me look at mainstream films with a more critical eye.

I’m not saying that mainstream films are no good. In fact, most of the films I see can be considered mainstream.

However, I just have to take one look at a film opening up this weekend called Step Up 2: The Streets.

It might be because I’m more a rock music kind of guy, but I don’t get all these urban dance movies that come out.

Personally, I believe that this film is pretty much nothing but a commercial for its hip-hop soundtrack. Proof of this can come from the fact that I know nothing about the story, but I do know that it features the hit single “Low” by Flo Rida (a fact that’s advertised with the movie).

This commercialization makes me sick to the stomach. I want to watch movies because I enjoy seeing these stories on screen. I don’t see movies because its some product that will make me by more products.

It’s films like this (an upcoming film called Never Back Down is another example) that just makes me want to avoid the cineplex and exclusively watch independent films.

I can just be glad that not all mainstream films are as blatantly commercialized as Step Up 2.