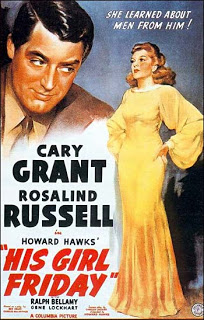 George Clooney’s Leatherheads was inspired of the screwball comedies of old, and that film I believe it really picks up on is Howard Hawks’ 1940 film His Girl Friday.

It features Cary Grant as a newspaper editor, who is trying to prevent his ex-wife (and former star reporter) from remarrying.

The film was the second screwball comedy I’ve seen (the other being Hawks’ earlier film Bringing Up Baby) and it’s definitely the one I enjoyed more.

So, if you like the fast talking and innuendo of screwball comedies, then His Girl Friday is definitely worth seeing.