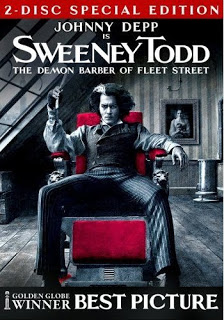 There’s nothing jokey about the DVDs being released this week.

The big release is undoubtedly Tim Burton’s adaptation of Sweeney Todd: The Demon Barber of Fleet Street, which is being released in both single and two-disc editions.

The other new film being released is the film version of Alvin and the Chipmunks, which might be a good choice for the kids.

For those of you shopping the High-Def market, you can now pick up the Blu-Ray edition of M. Night Shyamalan’s Unbreakable, as well a new discs for Hidalgo and Coyote Ugly.

And that’s this week’s DVD picks.