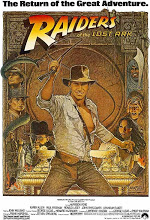 With the release of Kingdom of the Crystal Skull imminent, it’s a no brainer that I should go back and revisit the original films from the series. Let’s get started.

Raiders of the Lost Ark
The first film in the series is the film I chronologically seen last. This is only film in the series to not to feature the “Indiana Jones” name (though it was added for later video releases), which suggests that this may have been intended as a stand-alone picture and used the name as a selling point for the sequels.

This film has probably the most famous scene in the entire series (the giant bolder) and it is kind of funny that this scene happens in the first five minutes of the film.

I got a chance to see this film theatrically a couple years ago and I have to say that, even though I saw the film many times at that point, it was definitely a wonder seeing the film on the big screen where is definitely belongs.

While it has to settle for being my second-favourite in the series, Raiders of the Lost Ark was still a fun ride.

The biggest difference would how much darker the film is. The film, which includes a scene of human sacrifice (complete with heart removal), is notable for being responsible for the introduction of the PG-13 rating.

The also has arguably the most annoying sidekick of the whole series in the form of Short Round. I definitely say that little Asian kid was no Sallah.

It was still an OK movie, but I’m more willing to rewatch the other two than put on this one.

Indiana Jones and the Last Crusade
Now we are the last instalment of the series, which was released nearly 19 years ago.

This was definitely my favourite film in the series. The main reason for my enjoyment of this film was the introduction of Sean Connery as Indiana Jones’ father. It was great having the actor who played James Bond (though, admittedly, this was the first film I saw Sean Connery in) play Indiana Jones. This was definitely a wink to how George Lucas brought up the ideas for Raiders of the Lost Ark, while Stephen Spielberg was discussing directing a Bond film.

The film also brings back supporting characters from Raiders of the Lost Ark (Marcus Brody and Sallah) back for larger roles. As a result of this, The Last Crusade seems to have more of a connection to the first film than Temple of Doom. Another connection to Raiders was that Indy was once again searching for a religious artifact (the time the Holy Grail).

I could probably talk forever about how much I liked this film, however I should probably wrap things up and concentrate on the release of Kingdom of the Crystal Skull, which opens everywhere tomorrow.