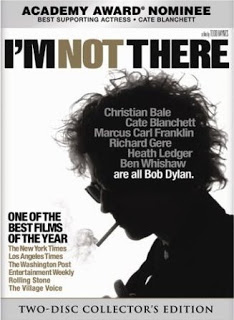 The biggest release coming out on DVD this week is, the unique take on the biopic, I’m Not There, which features six actors playing characters based on Bob Dylan. I saw the film back at the Toronto Film Festival and I commented how it was an okay film, with Cate Blanchett being surprisingly good in her role (she should have won the Oscar).

Other major DVD release this week include the romantic comedy P.S. I Love You and the urban comedy First Sunday.

On the independent front, a film coming out this week, which I’m a bit interested in checking out is the horror film Teeth. Also coming out is Bella, which I’ve heard some good things about.

Finally, to wrap things up this week, there is a new Blu-Ray version of the Tornado disaster film Twister.