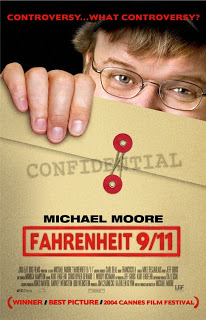 Wasting no time, it is being reported that Michael Moore is planning to make a “sequel” to his popular 2004 documentary Fahrenheit 9/11.

The documentary will talk about how bad it has gotten in the U.S. during the second term of president George W. Bush.

Since can’t really make a sequel to a documentary, I think it would be more correct to call this film a “follow-up.”

I really enjoyed Fahrenheit 9/11, but after last year’s Sicko I was woken up to how Michael Moore like to stretch the truth to get his point across (apparently people in London, ON have shorter waits in waiting rooms than people here in Toronto).

That said, his documentaries are always entertaining. Whether this “infotainment” is good is a topic for another day.

And that’s my interesting film news of the moment.