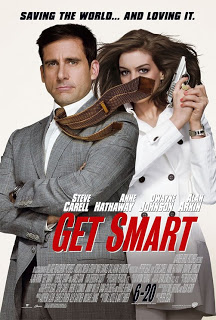 When I was a kid, I remember watching (and liking) reruns of the Get Smart TV show. However, I don’t remember that much other than the basics, such as the shoe phone (I would probably say most of my memories of Don Adams was as the voice of Inspector Gadget).

I would say that my fond, yet hazy, memory of the show helped me enjoy the movie without trying to compare it to the show.

I would say that the plot was thin at best (just a generic spy story). I also found the explanation for Anne Hathaway’s twenty year age difference with Steve Carell (so they could be plausible romantic foils) a little cheesy.

However, all those flaws were more than made up by how hilarious the film was. This film was filled with slapstick humour that nearly had me rolling off the edge of the seat laughing.

In the end, Get Smart may not end the criticism about making films about TV series, however I found it very funny and, in a comedy, that’s all that counts.