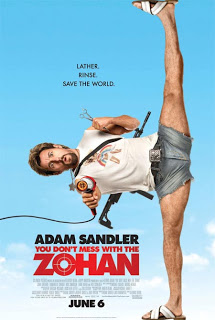 Adam Sandler’s comedies have always been hit or miss. However, for the last few years, he has been doing some different types of rolls, which did not really fit his character.

Some of the magic came back last with with I Now Pronounce You Chuck & Larry and it’s back in full force with this film, which is by the same director.

I have to say that this was the most hilarious film Adam Sandler has made in years. I can’t remember the last film of his I watched that made me laugh as hard as this film did.

It helps that the plot of a counter-terrorist agent becoming of hair dresser is so outlandish that it is impossible to take the film seriously and it helps me to just enjoy the show.

I also have to say that this film really pushes the PG-13 rating to the limit. I was surprised that some of the stuff shown in the film was allowed. However, that just helped with the humour.

In end, it’s great to have the zany Adam Sandler back and I can hope that he can carry this momentum into his next film (which is being directed by Judd Apatow — who also co-wrote this film).