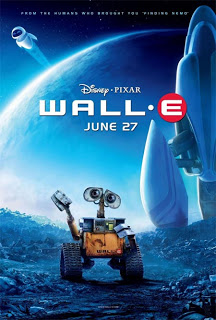 Even though I missed the film when it came out a couple weeks ago, I finally managed to see Wall-E today.

The film is also visually spectacular, which is a good thing since the bulk of the dialogue in the film involves synthesized robot sounds (to the point the the film’s sound designer is credited as “voicing” Wall-E).

This film is also notable for incorporating live action scenes, notably in video-messages featuring Fred Willard and inclusion of the film Hello Dolly.