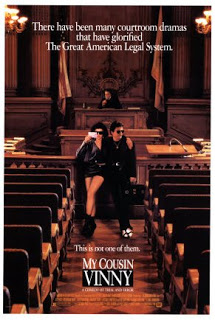 This 1992 comedy is the latest of my bargain bin acquisitions.

In the film Joe Pesci, fresh off his Best Supporting Actor Oscar for Goodfellas, plays a newly bared New York lawyer, who goes to a small Alabama town to defend his cousin on a false murder charge.

The film also features Marisa Tomei in his Oscar-winning role as Vinny’s feisty, yet intelligent, finance.

It was definitely a funny movie movie and I have to say that nobody can play a loud-mouthed New Yorker like Joe Pesci can.