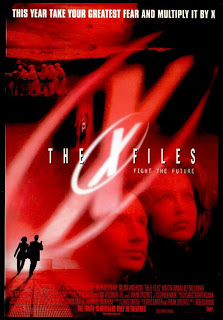 It has been nearly exactly one month since the second X-Files film came out. I commented in my thoughts how I was anxious to rewatch the first film, but I had trouble finding a copy.

I finally found a copy of the film a few weeks ago and I fulfilled my wish of watching it proper (without falling asleep through it).

My enjoyment during this second viewing was further enhanced by a better understanding of the overall mythology of The X-Files than I did a decade ago.

In my opinion this came off better and a movie better than I Want to Believe did. This was probably because it dealed with the Alien-invasion arc that played over the entire series instead of the stand-alone cases. I also found that it worked as both a stand-alone story and as part of the series.

The film is definitely worth checking out if you are a fan of The X-Files.