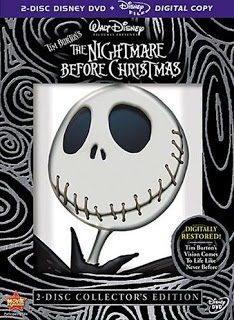 Fans of Tim Burton will probably enjoy this week’s release of the 15th Anniversary collector’s edition of The Nightmare Before Christmas (also on Blu-Ray). This one will definitely be on my wish list.

Other releases this week include the romantic comedy What Happens in Vegas (also on Blu-Ray) and the documentary Where in the World is Osama Bin Laden? (note: link goes to bundle with Super Size Me)

Direct-to-DVD sequels move to prequels this week with The Little Mermaid: Ariel’s Beginning.

New Blu-Ray releases this week include high-def versions of U-571 and Miami Vice.