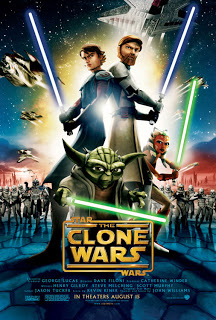 If you were like me and already seen Tropic Thunder (which is currently 83% Fresh at Rotten Tomatoes), you got to be thinking what other choices you have for a movie this weekend.

Well, you could try to brave the new animated film Star Wars: The Clone Wars, even though it is currently only 21% Fresh.

You can also go an check out the Kiefer Sutherland-staring horror film Mirrors, even though it has the lowest freshness rating of only 17% (but, then again, how often to horror films really get good reviews).

Finally, rounding out the week’s new releases is Woody Allen’s new film Vicky Cristina Barcelona, which is the best reviewed film this week with a 88% Fresh rating.

Note: I’ll be out of town until Tuesday, so there will be no Box Office Thoughts column on Monday (and the DVD Picks would probably be late).