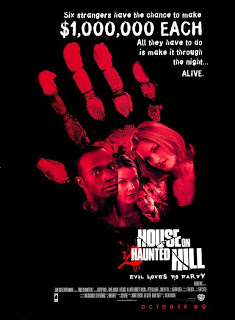 Today sees the release of RocknRolla, which is being produced by the, formerally horror-exclusive, Dark Castle Entertainment. As such, I thought I would make my second Classic Thoughts column, in this horror-themed month, the film that launched the company nine years ago.

Dark Castle Entertainment was originally formed to create remakes of the films of William Castle, who was (in)famous for having in-theatre gimmicks with his films.

The original House on Haunted Hill was one of the first big horror hits for Vincent Price back in 1959 and had a gimmick of a skeleton flying into the audience.

The remake is loosely inspired by the original. It features a similar plot outline and the characters (though named differently) are all based on characters from the original (including Geoffrey Rush in the Vincent Price role).

Differences include the fact that the house was a former insane asylum, where everyone was killed in an uprising, and also the remake features more violence and gore.

There are some chilling scenes early in the film (most notably a scene involving a camcorder recording ghosts), but overall it’s not too scary. However, I did find it an exciting and entertaining film and it’s a good film to put on around Halloween.